Where has the urban growth of Bangkok took place in the past decade and Which areas are going to experience the most dramatic urban growth within the next 5-20 years?

Based on the property market and the existing public facilities the (internal) urban growth of Bangkok is analyzed and localized. On this basis, depending on the official zoning plan and the flood risk areas, and especially considering the future expansion of the public transport network a hypothesis for the future growth and densification of Bangkok is formulated.

Bangkok property market
As a result from the asian crisis there was very little activity from 1997 – 2003 in the Thai property market as a whole, but since 2003, the property developers have done their utmost to fill any gaps in the supply of new housing stock experienced in those 5-6 years of inactivity. In fact the supply has grown so much, that in Bangkok cityarea alone there has been an increase in the last few years of approx. 40’000 condominium units a year (excluding detached houses, townhouses, apartments and serviced apartments).
High-rise condominiums in Bangkok are currently the most popular and easiest real estate investment opportunity of large project developers.

The analysis and localization of the built and planned high-rise condominium projects in the years 2000 to 2015 by eleven major project developers [1]has provided a clear picture. A majority of the about 130 examined projects have settled along the since 1999 operated Skytrain lines (Silom and Sukhumvit-line) and to a lesser degree along the MRT Blue Line opened in 2004. 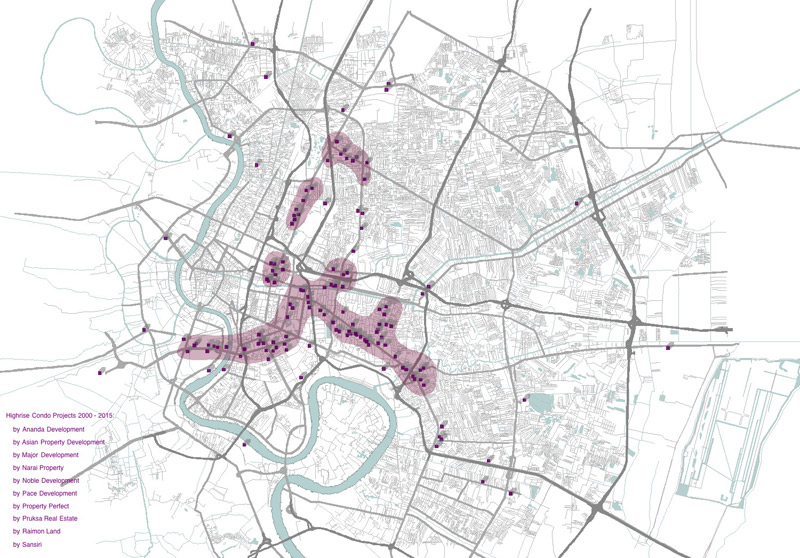 public transport
The Skytrain und MRT lines Linien („Mass Rapid Transit Master Plan in Bangkok Metropolitan Region M-MAP) initially began as a transportation project but quickly turned into catalytic converters of the inner urban growth and densification. (also see Bangkok’s public transport network).
The public transport networks are getting to become an increasingly more important factor in the future urban densification. They are therefore the most important steering instruments for urban development and significantly determining the strategic direction of a sustainable urban growth. 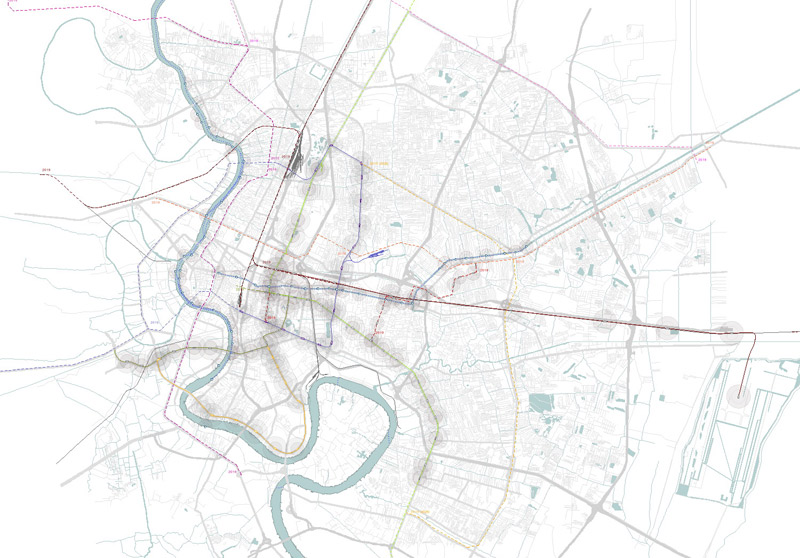 development plan / zoning plan
Traditional planning tools such as the zoning plan have of course also influence in the urban growth, where this plays more the role of regulation and less of active development. Since the 6th Development Plan (1987-1991) it was also achieved a better integration of land use planning and infrastructure investments to better influence the land use and thereby effect an organized growth of areas. 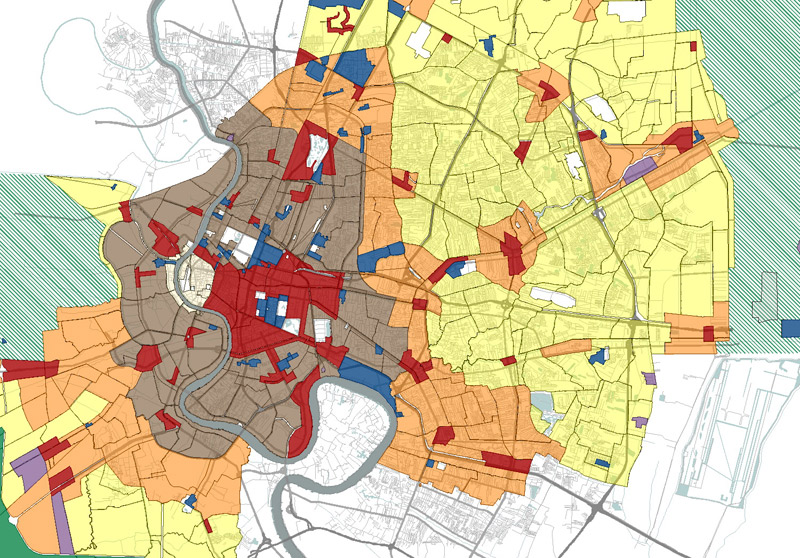 flood risk
The flood of 2011 on the metropolitan area of Bangkok has affected many peripheral and partly central neighbourhoods. The impact on urban development is difficult to assess, because on the one hand the authorities made great efforts for flood protection to prevent those events as possible. On the other hand life in Thailand is from the beginning of civilization based on the water and its implications. In the placement of industrial facilities this subject will be stepped up more noticeable and in the construction of detached Houses, the return to traditional elevated building typologies will prevail slowly again. 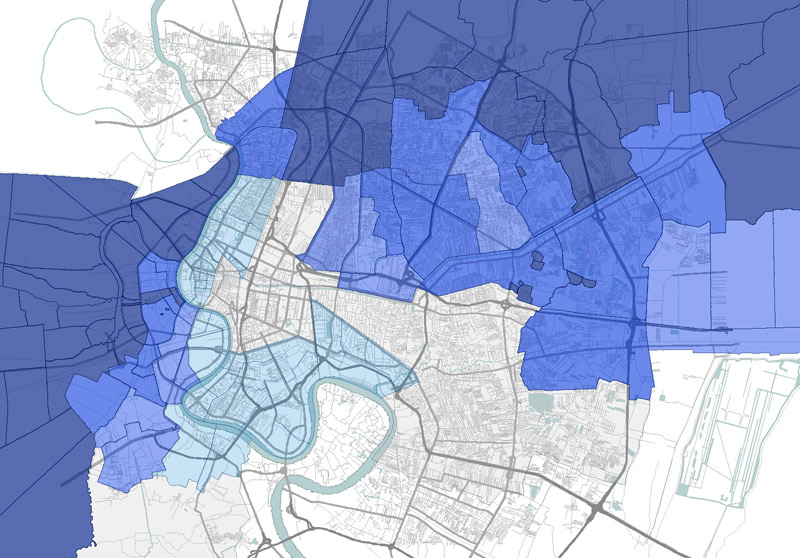 urbanity
The growth of a city underlying urban processes can be broken down in a simplified model in the following three main aspects: Borders – Differences – Networks

The level of urbanity is correlated with the density of the respective aspects.

future urban growth
This static view of Bangkok is interpolated for the elaboration of a growth thesis based on the borders, differences and networks. Some conditions work as a “push & pull” factors, like the expansion of public transport and others, such as the flood risk areas act as “limiting” factors.
On the following maps, the current (2015) and possible medium term (2020) and long term (2030) inner growth areas of Bangkok are designated.

Bangkok with the next urban growing areas

Bangkok with the next urban growing areas