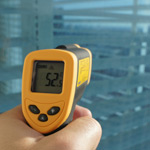 An empirical study of the surface temperatures of residential facades under influence of sun exposure in the southeast Asian region.

Background
In booming Asian metropolitan areas facades of many new residential buildings are only inadequately protected from the influence of the sun. This leads to substantial heat buildup inside the rooms and therefore causes high usage of machine cooling. The common use of single-glazed windows without sun protection for residential buildings normally is only aided by the use of inside sun protection in the shape of dense curtains or blinds/slat shutters.
The fundamental problem with inside sun protection results from the fact that the heat rays have already reached the inside of the building, and can only partially, through reflection, be returned to the outside. The heat load produced through sun exposure when using internal sun protection is about 3 times higher than when sun protection is used on the outside.

Empirical Study
This study should be seen as an illustration of these generally accepted facts and makes no claim to scientific evidence.
Measured and illustrated were the different relevant inside and outside surface temperatures of the facade of a residential building in Bangkok. 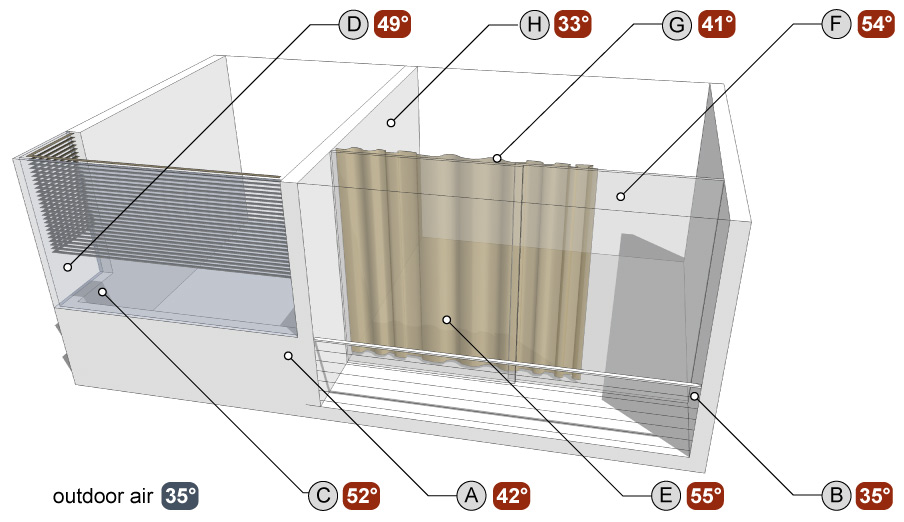 Interpretation of Results
The massive heat-up of the window panes, on the outside as well as the inside glass surface of up to 54°C significantly heats up the air inside the room and for a long period of time. Using sun protection glass, heat-up was still high, even though it was slightly less at 49°C. One could refer to them as solar heating elements, which of course are far from being desirable. After opening the inside curtain, its effect on inside air temperature was even increased. The curtain on the inside only prevents direct heating of the inside room surfaces, like floor and inside walls.
The heating up of the solid outside walls was a little more moderate at 42°C due to the reflective kusadasiozel.com white paint color and partial shading. Problematic for the inside room climate are larger parts of solid facade without thermal insulation, which are exposed to direct sun. These heated construction elements can store a large amount of solar energy for a long time, especially also into the cooler night, and radiate it into the internal rooms.

Calculation Example:
Assuming that the necessary cooling capacity, when using external sun protection, can be reduced by around 50 %, it would be possible to save about 800-1,200 THB per month for a 50-60 m2 west facing apartment in Bangkok.
For the year, this would result in savings of 9,600 – 14,400 THB, which capitalized with 6% would result in capital of 160,000 – 240,000 THB. From an economic standpoint only, this apartment is worth 160,000 – 240,000 THB more, just by adding external sun protection. Vice versa, it is possible to invest this amount of money into external sun protection without a negative financial outcome.