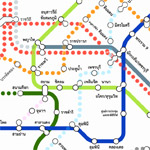 To improve the traffic problems of the rapidly growing metropolitan region Bangkok, the basis for the development of a public transport network was established 1994 with the “Mass Rapid Transit Master Plan in Bangkok Metropolitan Region“ (M-MAP).
The Skytrain und MRT lines initially began as a transportation project but quickly turned into catalytic converters of the inner urban growth and densification. 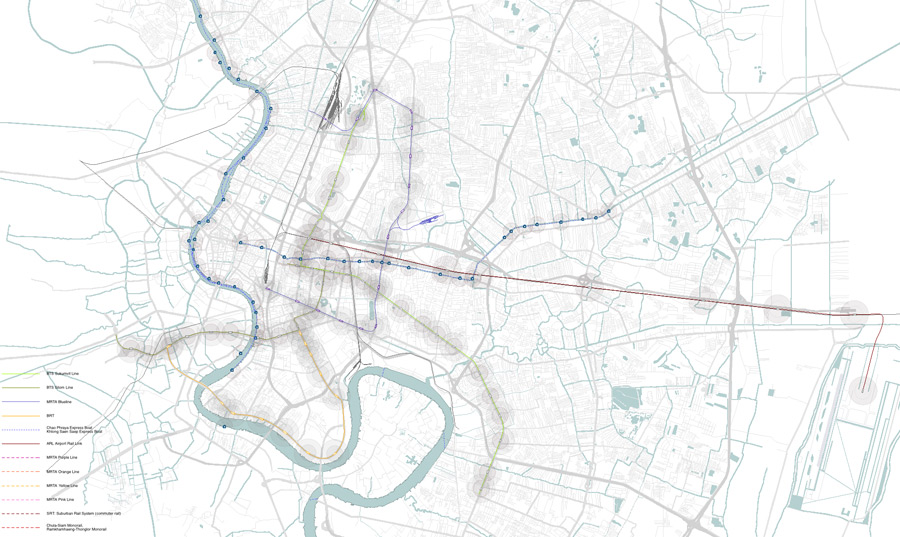 Long prior to year 1900, everyday life in Bangkok centered around rivers and canals. People preferred to install their homes on stilts along the riverbanks and in boathouses.
In the mid 1800s, the authorities started constructing roads and bridges in the city. Bangkok expanded into rural areas, and people, began to install their houses along roads instead of along the riverbanks. Reliance on water transport gradually gave way to reliance on a road-based transport system. Although there was more canal excavation in Bangkok, the lead role of waterways for Bangkok’s transport needs was decreasing.
After the invasion of the motorcars in 1902, the authorities constructed more roads to accommodate increasingly road-based travel needs. The city limit expanded linearly along the new roads. Urbanization without proper planning regulation unceasingly accompanied road construction, resulting in ribbon development. This phenomenon continues to the present day and causes tremendous problems to the city.
During 1960 – 1990 road transportation has become indispensable while major canals and tracks in Bangkok have been transformed into roads in order that the benefits of high-speed travel by automobile could be enjoyed. The remaining rivers and canals were mainly converted into sewer system.
The 6th Development Plan (1987-1991) recommended a better integration of physical planning and infrastructure investment in order to influence land-use and bring about more orderly growth of the area. The 6th Plan also intended to provide better and more extensive bus services, to build more primary and secondary roads in the outer area, to expand the expressway network, to complete missing road links, to provide bus-ways, mass transit lines and some traffic management measures in the city center.
After 1990, the government realized that the transportation sector was becoming more and more important as the national economic generator. Presently, Bangkok has various modern transport modes including the Skytrain and a subway, however, the road transport remains important. The existing transport system still cannot adequately satisfy daily travel demand and in many occasions, because of mal-coordination, transport services conflict with one another.
Source: BANGKOK TRANSPORT SYSTEM DEVELOPMENT: WHAT WENT WRONG? Prof. Wiroj RUJOPAKARN, Journal of the Eastern Asia Society for Transportation Studies, Vol.5, October, 2003)

Official Network Plan 2012 and with the planned expansions after 2030

The network of the Skytrain and MRT lines with the current expansion is organised as star-shaped network and therefore serves mainly the needs of the center areas. With closing the ring of the MRT Blue Line in 2016 and with the planned peripheral Pink and Yellow Lines (2019/29), the network is improved significantly. This also corresponds more to the provided future development of Bangkok due the expansion of metropolitan sub-centers along the outer ring road (ORR).

network expansion
The Bangkok intended and planned major expansion of public transport network until 2029 are very ambitious. Apart from the expansion of the individual lines, the efficiency of the network is increased by a clever arrangement of the stations and intelligent linking between the individual lines. In particular, this primary network should be coordinated and linked with the smaller, local transport infrastructure like buses, boats (Chao Phraya Express Boat, Khlong Saen Saep boat service) and monorails. 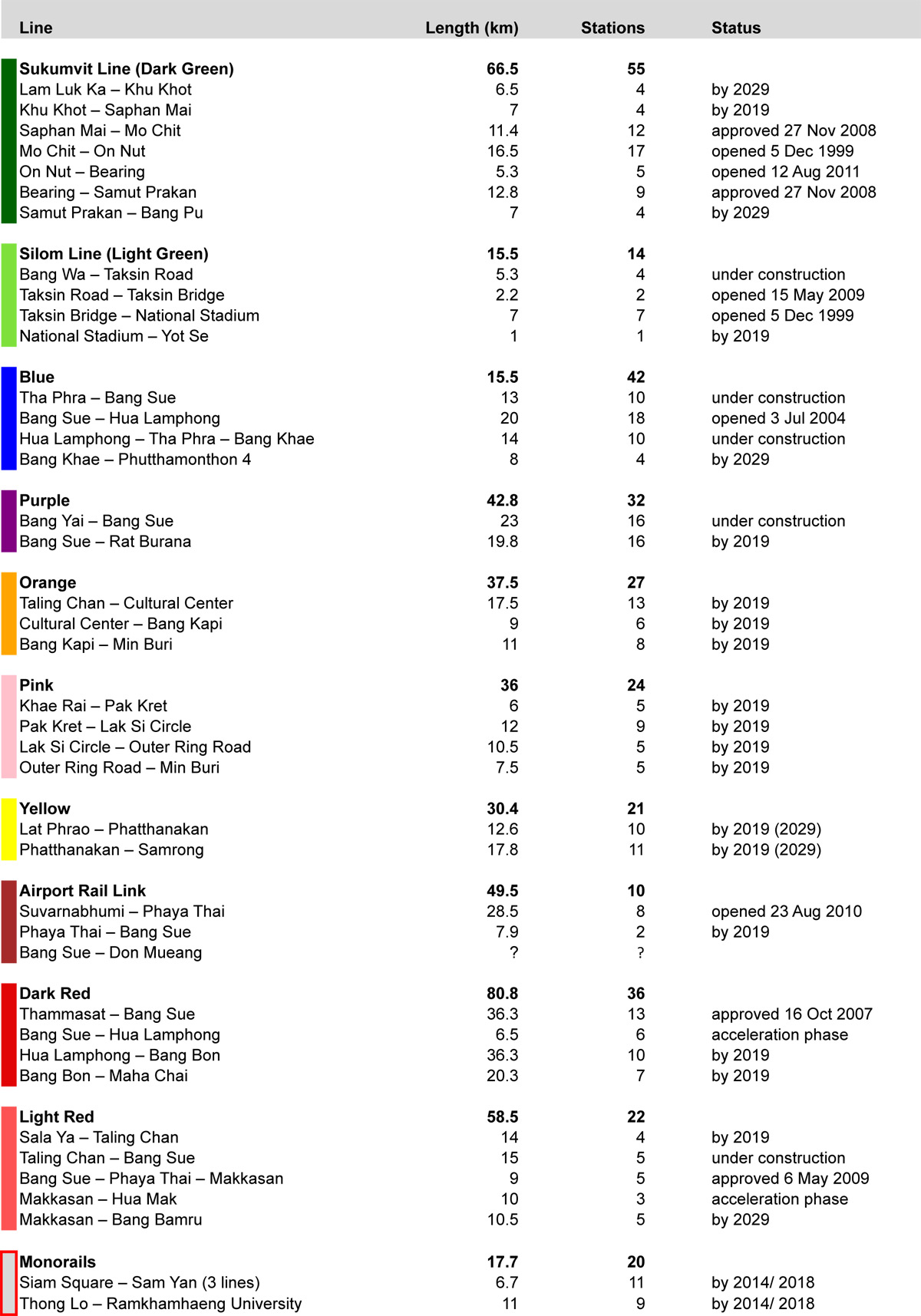 Monorails
The Bangkok Metropolitan Administration plans to develop a monorail railway system. The new rail system would serve as a feeder system for the BTS and MRT systems in the inner city as well as the Airport Rail Link. The BMA prefers a monorail or light railway system because it needs a relatively small investment and little construction land.
In particular there are two lines planned to be operational in 2014:
- Chula-Siam Monorail
- Ramkhamhaeng-Thonglor Monorail

Conclusion
In the “Mass Rapid Transit Master Plan” intended network expansions will promote urban densification to new network connected areas and will make new urban sub-centres emerge. The importance of public transport will increase significantly in the future and Bangkok will catch up in this topic to the level of already highly developed internationals regions. Based on this premise, the location of each individual property investment in relation to public transport networks is very important to gain a sustainable real estate returns. 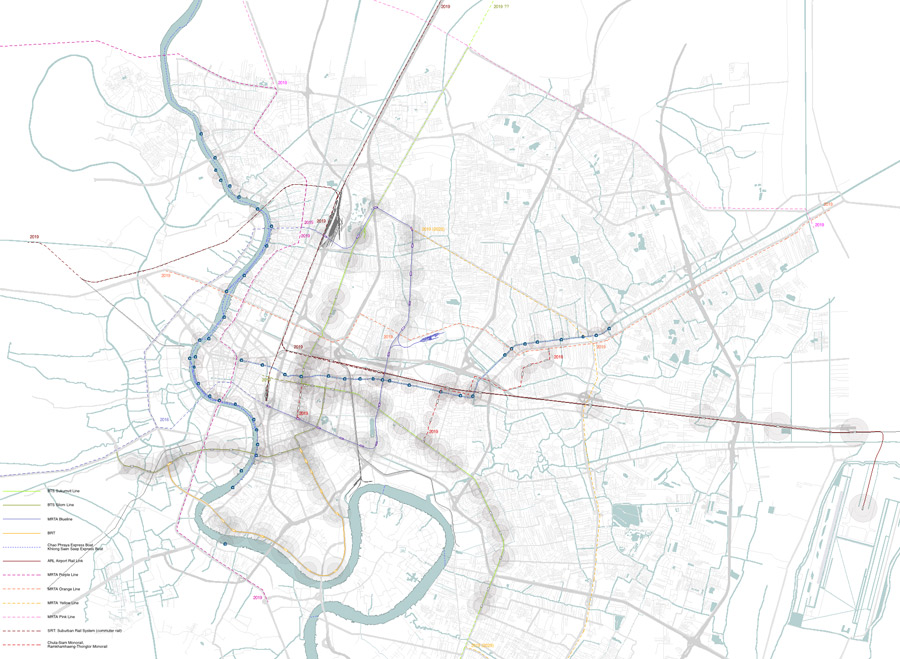 public transport network with the planned expansions after 2030